On Tuesday, June 28, MBK/J Records/Legacy Recordings will release new Deluxe and Collector’s 10th anniversary editions of Alicia Keys’ songs in A minor, the groundbreaking debut album masterpiece that propelled a then-teen-aged Keys into international stardom in 2001.

Available in a 2-CD Deluxe Edition and a 2-CD/1-DVD Collector’s Edition, the 10th Anniversary sets include songs in A minor era bonus tracks, demos, live performances and more, hand-picked by Alicia for her fans for these editions.

The two disc Deluxe Edition will include the original songs in A minor in its entirety in addition to a second disc featuring two previously unreleased recordings: the original funky blues demo for “If I Was Your Woman” and an early version of “Typewriter,” recorded in Alicia’s Harlem apartment in 1997.  The second disc also features hard-to-find rarities from the era including “A Woman’s Worth” (Remix) featuring Nas, “Juiciest” (Mixtape version), “Fallin'” (“Ali” Soundtrack Version) and “Butterflyz” (The Drumline Mix). 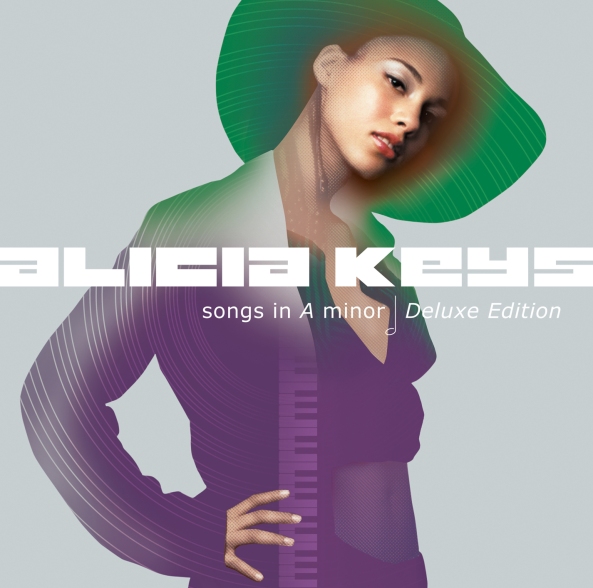 The enhanced second CD in the Deluxe 10th Anniversary Edition of songs in A minor includes “A Harlem Love Story,” the story behind the inspiration for the “Fallin'”/”A Woman’s Worth” videos, featuring new narration by Alicia Keys.  The original videos and new edit are directed by Chris Robinson.  (“A Harlem Love Story” may also be found on the Collector’s Edition DVD.)

The second CD in the Collector’s Edition showcases three previously unreleased live performances — “I Got A Little Something,” “Piano Mashup,” and a cover of the Doors’ “Light My Life” — recorded in Seattle on August 10, 2002.

The Collector’s Edition of songs in A minor also includes an exclusive bonus DVD premiering a revelatory songs in A minor documentary offering an up-close account behind the making of the album.  Family, friends and close collaborators share their perspectives on the struggles and triumphs encountered in the making of Alicia’s first record.  The film combines archival footage from the road, television appearances, music videos from songs in A minor, rare photographs and more to reveal the intimate and compelling story behind a legendary album.  This documentary is an up-close and behind the scenes account on the making of Alicia Keys’ first album with interviews with family members, friends, J Records executive Clive Davis, original manager Jeff Robinson, longtime collaborator and producing partner Kerry “Krucial” Brothers and many others.  A trailer for the documentary may be seen here. (http://bit.ly/songsinaminor)

Included in the Collector’s Edition of songs in A minor are a track-by-track commentary by Alicia Keys, an essay by Quincy Jones, rare period photos and more.

A limited run 10th Anniversary 2-disc 180g Vinyl Edition of songs in A minor, with original cover art, will also be available, making the first time the album has ever been struck in vinyl.

The 10th Anniversary Collector’s, Deluxe and Vinyl Editions of songs in A minor may be pre-ordered at Alicia’s website, where fans have an opportunity to win a trip to New York to see Alicia Keys perform.

Eevee, the grand prize winner of the Nescafe 3-in-1 Soundskool in 2009 will be celebrating their second year in the music industry this Friday, April 15 at Big Sky Mind. The group composed of Enzo Miguel Villegas (vocals, guitars), Paolo Segura (lead guitars, back up vocals), Jerrick Sy (bass) and Craig John Neniel (drums), moved from Davao to Manila 2 years ago and released their debut album ‘Paramdam.’ The album includes the hit single “Gusto Ko Lang Ng Girlfriend,” which was followed by “Waiter” and their latest “Larawan.” Joining them tomorrow, are Nescafe Soundskool 2010 finalists Kilos, Soundvent and Kaligta (also known as the X3M) who will soon release an album under Sony Music.

Learn more about Eevee, visit their fanpage at www.facebook.com/EEVEEBAND or follow them at twitter.com/Eeveeband 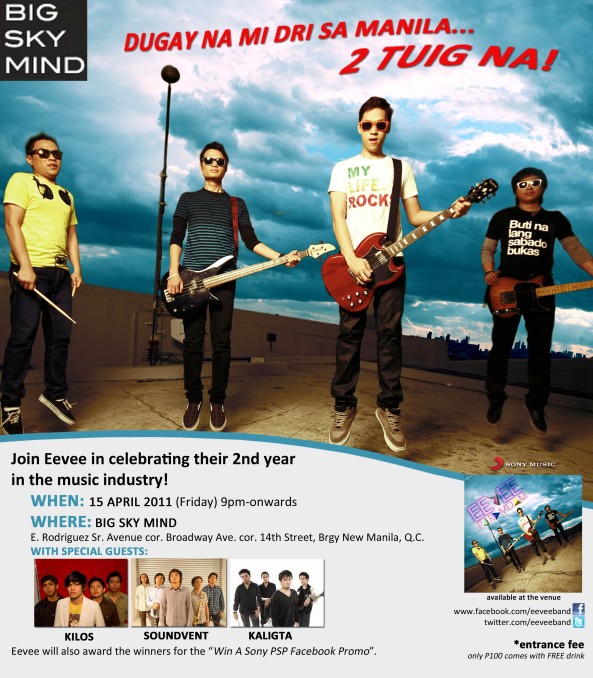