Check out the list of foreign artists performing in major events this year here in Manila:

Dates are subject to change. Click on the links for more info.
Sources: Philippineconcerts, ManilaConcertScene

Here are the latest news about your favorite OPM & US artists (Week of September 2 to 8, 2013)

Check out the list of international and local artists performing in major events this year here in Manila:

Dates are subject to change. Click on the links for more info.
Source: Philippineconcerts, ManilaConcertScene

Manila is definitely a hot concert destination this year, aside from big name artists who came early this year like Lady Gaga, Katy Perry, Nicki Minaj, Avril Lavigne, LMFAO, New Kids On The Block, Backstreet Boys and David Cook… they’re still a lot of upcoming concerts that you surely don’t wanna miss! Check out the list below:

Other artists who are said to be performing in Manila soon are Owl City, Jennifer Lopez and Enrique Iglesias! Will keep you posted for updates.

Cyndi Lauper burst onto the world stage as the quintessential girl who wants to have fun. After more than 25 sterling years and global record sales in excess of 50 million, she has proven that she has the heart and soul to keep her legion of fans compelled by her every creative move.

The beauty of Cyndi Lauper is that she has evolved into a richly multi-faceted renaissance woman who strikes a resonant chord with each project.

After winning the Grammy in 1985 for best new artist and becoming the first artist in history to have five top ten singles from a debut album, Cyndi Lauper continues to garner critical acclaim as a singer, musician, actor and writer. Cyndi has released 12 albums, over 40 singles and has sold more than 25 million records world wide.  She has been nominated for 13 Grammy Awards, 2 Emmy Awards, 2 American Music Awards, 7 American Video Awards, 18 MTV awards.

As an actor, Cyndi has appeared in such features as Mrs. Parker and the Vicious Circle, Life With Mikey, Off and Running, Vibes and opposite Christopher Walken in her critically acclaimed dramatic role in The Opportunist.  Television credits include Queer as Folk, Live and Kicking and Noel’s House Party (both for the BBC) and her Emmy Award Winning performance (Outstanding Guest Performance in a Comedy Series) as Marianne Lugasso on Mad About You (94-99).  Cyndi has also lent her talents to other film and TV projects voicing animated projects for Disney and The Simpsons as well as scoring soundtracks for the films Off and Running, Private Property and the title song for Nick Cassavete’s, Unhook The Stars. Cyndi made her Broadway debut in 2006, in the role of Jenny in The Threepenny Opera. When she is not writing and performing, Cyndi is continuing to develop her skills as a director, frequently working at the helm of her own music videos as well as directing for commercials like the Trivial Pursuit’s “Totally ’80s” board game.

An unwavering advocate for lesbian, gay, bisexual and transgender (LGBT) equality since the start of her career, Cyndi created the True Colors Tour in 2007.   The Tour has brought together artists like Erasure, The B-52s, the Indigo Girls, Deborah Harry and Joan Jett & the Blackhearts for shows that successfully merge great music and public awareness about the issues facing the LGBT community.

To further her role as an activist, Cyndi founded the True Colors Fund in 2008.  The non-profit seeks to inspire and engage everyone, particularly the straight community, to become involved in the advancement of LGBT equality. The Fund recently launched the Give a Damn Campaign, an extensive and innovative online public education and awareness initiative.

In addition, Cyndi is the Honorary Chairperson of the True Colors Residence, the first project of its kind to provide a permanent, supportive and secure home to formerly homeless LGBT youth in New York City. In appreciation for her work, Cyndi has been honored by many organizations including the Human Rights Campaign, GLSEN and PFLAG.

Cyndi is also a tireless participant in the struggle to end the HIV/AIDS pandemic. Most recently, Cyndi has joined with Lady Gaga to be the spokespeople for the 2010 MAC Viva Glam Campaign and to educate woman about HIV/AIDS around the world. She also continues to participate in efforts and events for organizations like AMFAR, Broadway Cares/Equity Fights AIDS and the Gay Men’s Health Crisis in order to speak out about the need for education and greater resources to fight this disease. 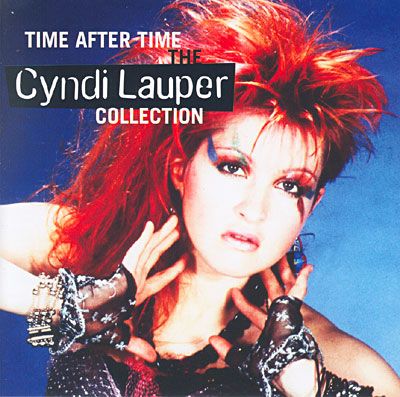 Grab a copy of Time After Time – The Cyndi Lauper Collection, available in music store nationwide, only from Ivory Music & Video, the exclusive licensee of Sony Music in the Philippines.