Big Time Rush “Music Sounds Better With You”
“Music Sounds Better With You” is the first single of Big Time Rush’s forthcoming second album ELEVATE. The new songs are also featured in the second season of their Nickelodeon hit show Big Time Rush. The band will be hitting the road in February 2012 for the Better With U Tour starting in Las Vegas. The tour is going to be a boy-band spectacular, as British sensations One Direction will be the opening act for most of the shows. ELEVATE will be out in stores early 2012.

The Fray “HeartBeat”
“Heartbeat”, the first single of their upcoming album Scars and Stories. “Heartbeat” was written by The Fray’s front man Isaac Slade and Guitarist Joseph King. The song was inspired by a real life and very poignant encounter Isaac had with a genocide survivor in Ruanda. The music video was shot on the California coast north of Malibu the night of October 14, 2011 and directed by Justin Francis.  In the directors words:”On the surface it’s a beach party performance video, but it’s really about people coming together and sharing a common experience, and enjoying a once-in-a-lifetime evening together” – Justin Francis

Foster The People “Call It What You Want”
“Call It What You Want” is the 3rd single from indie pop band Foster The People’s ‘Torches’ album. The music video was directed by Ace Norton (who also directed the video for “Helena Beat”) where the band goes through a series of odd behaviors from the comforts of a lavish estate. Torches album is now out in stores, do grab a copy.

END_OF_DOCUMENT_TOKEN_TO_BE_REPLACED

Hot Chelle Rae, “Best New Artist of the Year” at the 2011 American Music Awards held a release party for their album “Whatever” last November 29 in New York. Aside from the album signing, the band also treat their fans with a live performance! Watch now here and don’t forget to grab a copy of “Whatever” in stores. 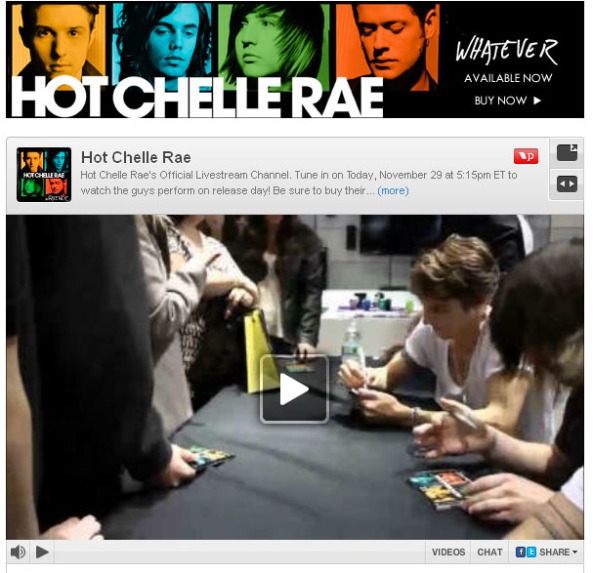 Source: www.hotchellerae.com
Before Hot Chelle Rae “fueled up the Jeep with bubbly elastifunk and breezy hip-hop swagger” (as Entertainment Weekly put it) with their brand new single “I Like It Like That,” the Nashville-based quartet scored a bonafide breakthrough smash hit over the last several months with “Tonight Tonight.”

Declared “one of the catchiest pop-rock anthems of the summer” by USA Today, “Tonight Tonight” crashed into the Top 10 on the Billboard Hot 100 chart in July like an unruly teenager, shot to No. 1 at Hot AC radio in September, was certified double-platinum in the U.S., and certified platinum in Canada and Australia. Meanwhile, its hilarious video (featuring a cameo by guitarist Nash Overstreet‟s brother, Glee‟s Chord Overstreet) has racked up nearly 30 million views online, energizing the group‟s active, devoted fan base. But it wasn’t until Jon Stewart sang a snippet of its chorus on The Daily Show that the band realized just how thoroughly “Tonight Tonight” had penetrated the mainstream.

“That was crazy,” recalls frontman Ryan Follese. “I was in my bunk on the bus when Jamie shouted, “Jon Stewart just sang our song!‟ I love The Daily Show so much, I couldn‟t believe it. The episode was airing again later in the night, so we stayed up to watch.” Adds Jamie: “I don‟t know if Jon Stewart even likes the song, but I don‟t care because it was so awesome. As long as he knows it, I am extremely happy.”

What’s not to like? With its once-heard-never purged melody, “la la la” refrain, and sly references
to Zach Galifinakis, the song is a shameless crowdpleaser. It has also been a game-changer for this
hard-working young band, which formed in 2005, released its debut album, the dance-rock oriented
Lovesick Electric, in 2009, and has been waiting for its break-out moment ever since. Hot Chelle Rae‟s
time has arrived with the band‟s new album, WHATEVER — an unstoppable fireball of radioready
tunes that finds them embracing who they really are: a band unabashedly in love with pop music.

Hot Chelle Rae began working on WHATEVER at the end 2010, traveling from Nashville to Los Angeles and New York for writing and recording sessions with various collaborators, including Emanuel Kiriakou (Jason Derulo, Selena Gomez), Evan Bogart (Adam Lambert, Rihanna), S*A*M & Sluggo (Boys Like Girls, Cobra Starship, Gym Class Heroes) and rising star production trio Andrew Goldstein, Dan Book, and Alexei Misoul. They emerged with a clutch of fizzy sing-alongs, like the current single “I Like It Like That” (featuring hip-hop duo New Boyz and inspired by memories of crazy nights out in Nashville), quirky break-up song “Honestly,” be-yourself anthem “Beautiful Freaks,” fingersnapper “Radio,” as well as heartfelt tracks like “Keep You With Me” and “Why Don‟t You Love Me.”

Through it all, the band keeps the melodies sleek, the harmonies tight, and the performances solid on WHATEVER, whose title is a playfully ironic comment on the hard work that went into writing and recording it. “The hardest thing to do is write is a simple pop song,” Ryan says. Adds Nash: “I read something this songwriter Jim Collins once said that stuck with me. He said, „If you can’t write a melody on piano with one finger, then it’s too complex for anyone to latch on to.‟” The band took that idea to heart, but made sure the other elements in the songs could pull their weight. “One of my favorite things about pop music is, obviously, the simplicity of the melodies, but the underlying tracks have to be really entertaining for the song to be any good,” Ian says.

The elegant ease of the songs is something only a band with serious chops could pull off, and indeed, all four members of Hot Chelle Rae have considerable musical pedigrees: brothers Ryan and Jamie are sons of A-List Nashville songwriters Keith and Adrienne Follese, Nash is the son of five-time BMI songwriter of
the year, Paul Overstreet; and Ian’s dad Phil Keaggy is a Grammynominated guitarist and multiple Dove Award recipient. Says Ryan, “My dad is a talented writer with a lot of hits to his credit and he has helped teach Jamie and me how to write great songs.”

Now Hot Chelle Rae is ready to cash in the chips it‟s earned with the success of “Tonight Tonight” and “I Like It Like That.” “Those songs set the stage for WHATEVER,” Ryan says. “It‟s loaded with feel-good, windows-down tunes that people can relate to and that are fun to play live.” The band spent the summer on the road with We The Kings and the fall touring with The Script in the US, along with a handful of headlining European tour dates. In early 2012 they will headline a tour across the United States before heading to Australia for a March arena tour with Taylor Swift, where they are sure to win over even more new admirers. “Our fans are so loyal and engaged,” Nash says. “The most fun we have playing live is when they are excited and singing along. It‟s really energizing to have them instantly giving it back to you. It keeps us going and hyped to carry on.”