Before Incubus rock Araneta Coliseum on July28, join us and Incubusstreetteam Ph in celebrating the band’s new album “If Not Now, When” on July 14, 2011 (9pm) at B-Side Makati.

Also get a chance to win Incubus concert tickets and meet & greet pass when you buy Incubus’ If Not Now, When? album starting on July12 at any Odyssey store or at the Incubus Tribute Party on July 14 at B-side Makati, just make sure to bring your receipts.

END_OF_DOCUMENT_TOKEN_TO_BE_REPLACED 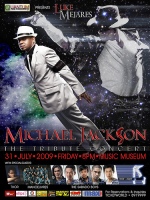 How do you pay tribute to the legacy left behind by one of the world’s phenomenal pop icons of all time? Let local R&B sensation Luke Mejares count the ways as he salutes the life and music of Michael Jackson on July 31, 2009 at the Music Museum in Greenhills, San Juan.

A true and devoted fan of the man dubbed as The King of Pop, Luke last year staged a successful concert billed, Luke… It’s Michael Jackson, also at the Music Museum where he dished out MJ’s hits one after the other much of course to the delight of the audience who witnessed the spectacle.

The recent passing of Jackson caused by cardiac arrest at the age of 50 prompted Luke to once again dedicate a special evening to honor the fallen pop legend.

Unlike last year’s show where Luke assumed MJ’s persona by incorporating the icon’s signature pop music to his own brand of R&B, this event promises to be more intense and heartfelt as Luke pays homage to Jackson’s music and enduring legacy.
END_OF_DOCUMENT_TOKEN_TO_BE_REPLACED